A Sheriff’s Authority Defined in Law

There is a call around Australia for the restoration of a Common Law Public Official as an office of Sheriff.

The Office of Sheriff which was central to the rule of law under the British Legal System in 1900 when the Commonwealth of Australia Constitution Act 1900/01 became law.

The Sheriff’s authority was regulated by an Act of the Parliament of the United Kingdom, and while the Common Law Public Official Office of Sheriff was declared by the Sheriff Act 1887  C55, 50 and 51 VICT . 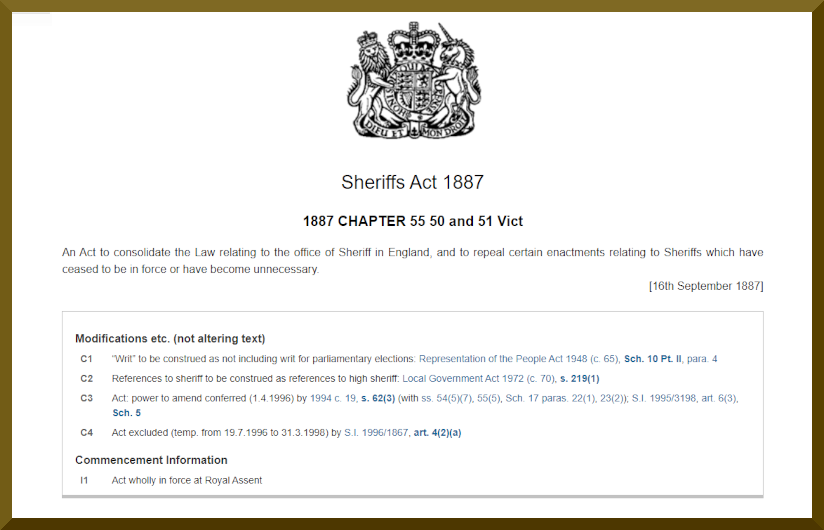 It is an ancient Office and central to the rule of law. The earliest reference to a Sheriff in the Literature is 1372 when Sheriffs and Lawyers were excluded from Parliament.  It was a Declaratory Act.

Some extracts from it.

A Justice of the Peace

A Justice of the Peace is a judicial officer of a lower or puisne (means minor) court elected or appointed by means of a commission to keep the peace. Depending on the jurisdiction such justice dispenses summary justice or merely deals with local administrative applications in common law jurisdictions.

A Justice of the Peace is elected from the citizens of the jurisdiction in which they serve and are (or were) usually not required to have any formal legal education in order to qualify for the office.

The word “court” meaning (Wikipedia)A court is any person or institution, often as a government institution with the authority to adjudicate legal disputes between parties and carry out the administration of justice in civil, criminal and administrative matters in accordance with the rule of law. In both common law and civil law legal systems courts are the central means of dispute resolution, and it is generally understood that all people have the ability to bring their claims before a court.

In Australia after the “Kable Principle” was established any court without a jury is without jurisdiction in any Commonwealth matter.

It has been said that if you give a man a fish, you feed him for a day, but if you teach him how to fish, he will be fed forever. A Common Law Court consisting of a Justice (of the Peace) and 12 jurors, with an elected Sheriff from the county is the tool that can be activated to restore the rule of law in every County.