People create governments to serve,  not  to rule.

A re-presentative government, elected freely and fairly, is by definition a Public Trust instituted to serve Private Sovereign People in the Common Law Jurisdiction. Such a sovereign government is an unincorporated Common Law Assembly, or a “body politic”, not an incorporated “body corporate”.

The Sovereign People place their Trust in the governance skills of their elected re-presentatives, who are elected into “office”, not into “power”. Your re-presentative “goes in your place”.

Sovereignty resides in the People, whose power is the source of Law.

Your government is “public”, employing numerous Public Officers, each of whom swears an oath of allegiance “according to law”, as written in the Oaths and Declarations Act 1957. Your Head of State is the principal Trustee for the Law of the Land, the de jure Common Law, acknowledged in the Imperial Laws Applications Act 1988: 'After the commencement of this Act, the common law of England (including the principles and rules of equity), so far as it was part of
the laws of New Zealand immediately before the commencement of this Act, shall continue to be part of the laws of New Zealand.' It is therefore the sworn duty of all Public Officers to uphold the Common Law embodied in the Private Sovereign People.

If the people's sovereign authority, partly delegated to their government, is turned against the sovereign people, the Public Trust is betrayed. Sadly, centuries of systemic monetary, legal and political corruption have deeply subverted our government, which has been incorporated to serve the debt-money system of bondage, extracting wealth for a global power elite who rule at the expense of the majority.

Nevertheless, the foundation of our government is the Public Trust, over which the People are the Sovereign power of the Nation.

The beginning of freedom is the realization that your Public Trust is there to serve your Life, not take it. The Power of your Life is found in your self-awareness, for we intuitively know that no other man or woman was born as our master.

Freedom is your right. It is not given, but exercised, and it is held by attention to your living Right. It is your responsibility to know and understand your inalienable rights so that you can defend them whenever someone attempts to deny you those rights.

Public Servants serve the Private Sovereigns who, having formed the institution of a freely elected unincorporated government for the benefit of the People, are governed by their consent.

Many Public Servants swear a Oath of Office to serve “according to law”, which is the de jure Common Law, also know as the “Law of the Land”. Public Servants do not swear an Oath to serve in de facto Admiralty Maritime commerce, also known as the “Law of the Sea”. However, members of the private Bar Association swear an Oath to serve the Bar Association, which presents a conflict of interest in matters of government and justice. This subversion of the Common Law courts supports the crime of “personage”, knowingly representing a living man or woman as a legal fiction – a form of corporation, such as an “artificial person”, trust, public utility, or foundation. “Personage” is committed by deceptively “mirroring” the NAME, causing unwitting “joinder” to a legal fiction, and it is perpetuated by “barratry”, the crime of bringing false claims in court. The term “barratry”, appropriately, comes from the “Bar Association”

The Police and All Officers of the Law

Your Public Servants include all Officers of the Law. Most frontline “Police Officers”, however, perform two roles:

As Peace Officers they uphold the law, discharging their impartial duties under Oath “according to law”, which is the de jure Common Law Jurisdiction, also known as the “Law of the Land”. As such, they have a Fiduciary Duty to serve and protect the living people. Peace Officers swear an Oath of Office to “keep the peace”, and are protected by a Public Bond, having Limited liability.

As Policy Officers they enforce statutes, which prescribe the legal terms and conditions of contracts with penalties etc., in the de facto Admiralty Maritime Jurisdiction, also known as the “Law of the Sea”. This role dominates their training and time. Policy Officers do NOT swear an Oath to “enforce statutes”, and are NOT protected by a Public Bond, having Unlimited full commercial liability.

“Police Officers” are either “on duty”, under Oath, and “in the public”, or “off duty”, not under Oath, and “in the private”. Conducting private commerce for YOURNATION (INC.) in Admiralty Maritime Jurisdiction is not part of the sworn duty of a “Police Officer”. An Officer conducting private commerce in support of the debt-money system of bondage can be described as a private mercenary abdicating their Oath.

All legal jurisdiction over a man or woman requires their consent, and so all presentments from of a “Police Officer” are a “service” offered by “consent”.

The police cannot stop you, question you, detain you, arrest you, search you, or charge you, without your consent, if there is no victim. Ultimately, the “administrative courts” cannot fine you or imprison you without your consent. But if at any point you “understand” (stand under their authority), agree to anything, or give them the artificial legal “person” NAME, you are consenting.

Thanks for this information from: https://livingintheprivate.blogspot.com 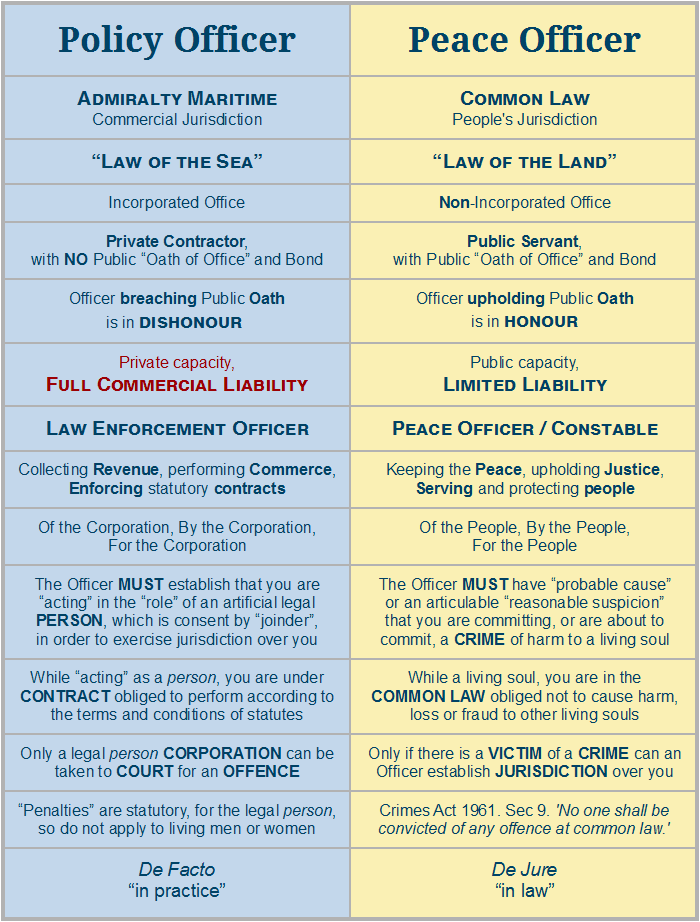