What is a Common Law Assembly?

An Assembly is established when a group of people gather and agree to work together for a common purpose. Each Assembly becomes a local government of the people, by the people, for the people when at least twelve or more assembly members sign the Charter to Establish and Maintain a Common Law Assembly. 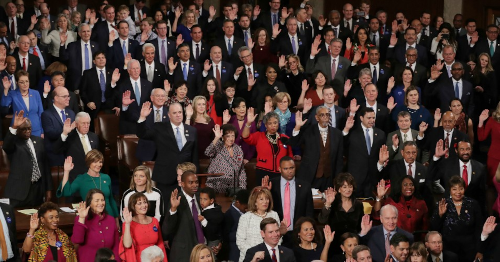 Once a community establishes an assembly, it has all the powers of a government. These powers include, but are not limited to:

At this stage (this may change as assemblies grow in numbers):

Where do Assemblies get their power to govern?

All law is empowered by The People.

In addition, the Magna Carta establishes the rights of the People to decide how they wish to be governed. It gives the People the right under Article 61 to lawfully rebel against a government of the day if it no longer serves the will of the people

Sections 7 and 24 of the Commonwealth of Australia Constitution Act 1901 specifically state that only the people may select their representatives. It does not mention politicians, political parties, or even a Prime Minister. If they are not mentioned in the Constitution, they are null and void under the law: They have no authority to make laws, or govern us without our consent. If we wish to stop the political parties ruling over us, we must all stop voting for them. When we deny them our power they cannot enter our Parliament.

By convening Common Law Assemblies we establish local governments of the People, by the People, for the People.

What are the Assemblies going to achieve?

As the number of people signing on as Chartered members of assemblies grows, the National Executive will convene a series of National Assembly Congresses to discuss setting up a government of the people, by the people, for the people under Common Law. No timetable has been set for this action to take place. It can only happen when at least 1% of the Australian people demand change to the current government system. Congresses will be formed as and when the people decide. There is no limit on the number of Congress meetings, or the date, time and place where they will be held. These decisions rest with the People of the Commonwealth as and when needed.

These Congresses will consider how to organize the government and then present their findings to the People for approval in a series of carefully considered national referendums. No congress may pass a law or implement their decisions without the approval of the people voting in a referendum.

Each assembly will elect one delegate to attend the national Congresses. These delegates will be appointed for a set time, and they may be recalled and replaced at any time at the will of the assembly members. The delegates will give the wishes of their assembly to their Congress representatives, who will then debate them until they arrive at a consensus agreement. If no consensus can be reached, the delegates must return to their assemblies to discuss the reasons, and then ask for further instructions.

Only when the Congress has reached a consensus will they present their proposed Law to the People of the Commonwealth of Australia to vote on in a referendum.

There is no restriction on how long this process will take, as the Congresses will decide that as they debate the proposals and then ready them for a vote. This will take time, but it is the fairest and most equitable way for the people of the Commonwealth to decide how they want to be governed, and by whom.

How will the Congresses be Organized?

We envisage the first Congresses will be held by Zoom calls, as it would be too costly for delegates to travel and meet in a central location. However, as decisions are made that will require debate between delegates, they may decide to convene at various locations so that they can continue their debates in person. Each Congress may decide to form sub-groups for a Regional area to confer with assembly members in order to arrive at a consensual decision.

What form of government do we foresee being agreed upon?

We cannot answer this question with any certainty, but a proposal for the future of government in Australia has been proposed in the Advance Australia Website .

This website proposes a 5-Step Plan to undo the damage the political parties have inflicted on our once vibrant, free and wealthy country. The Plan proposes five easy to implement steps to be voted on in referendums of the people to amend the Constitution.

Steps 1 & 2 propose amending Section 128 of the Constitution to put the power into the hands of the people through Citizens Initiated Referendums, coupled with implementing a digital voting App secured on the Block Chain to ensure the strongest security and privacy for our votes.

Step 3 proposes amending the Constitution to allow the creation of Regional governments. Each assembly will consist of no more than 5,000 members who will elect one of their own to represent them in a Regional government. These representatives will be directly accountable to the voters, and may be recalled at any time and replaced if they do not perform as the Assembly has instructed them. 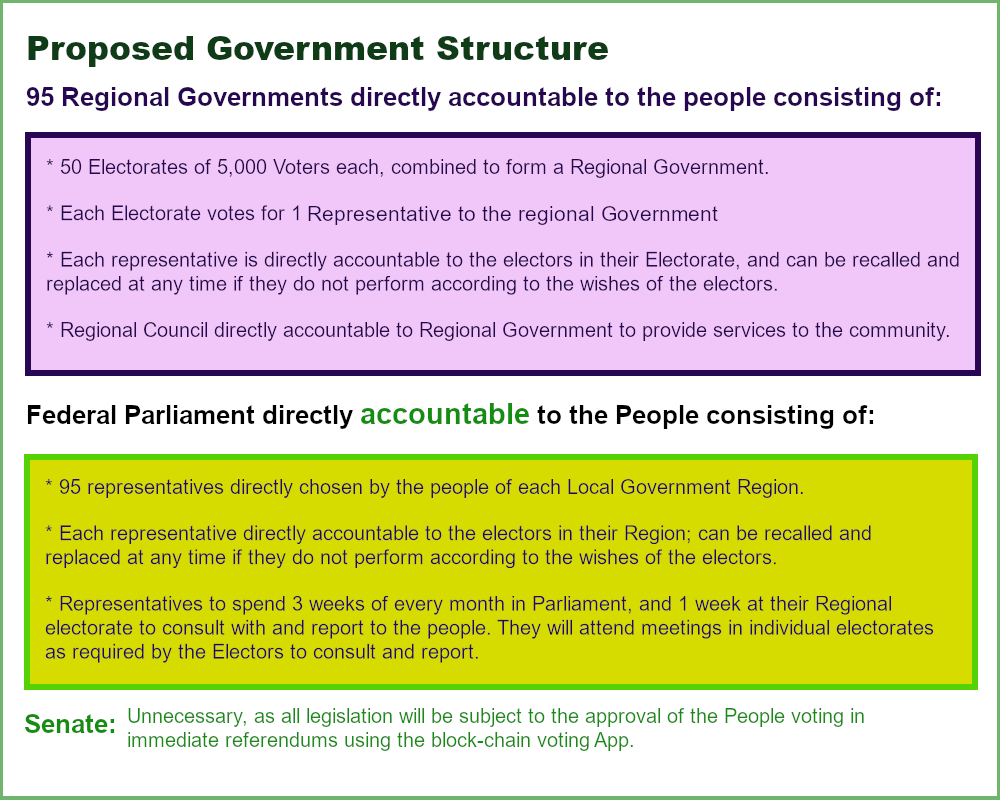 A Regional government will be created by combining 50 Assemblies.  Regional governments will be responsible for providing services to the community, such as roads, garbage collection, water, sewerage, etc. They will have no power to impose fines or collect rates without the approval of the assembly representatives.

Each Region will elect one person to represent the Region in Federal Parliament. These representatives will be directly accountable back to the voters, and may be recalled and replaced if they do not perform. For more information, please visit the Advance Australia Website.

Step 4 will eliminate all taxes, except for taxes on corporations/companies. As these entities create jobs, manufacture goods and services, and profit from that, they should pay a small tax (to be determined by the national Parliament) each time they do a bank transfer or trade in crypto currency or other forms of payment. The banks will be responsible for creating and maintaining a digital solution to manage the tax collection and deposit it into government General Revenue.

Step 5 asks that all able Australians aged 18 to 38 give something back to the country by choosing to perform Military or Civil service. Coupled with this will be a law requiring that all equipment supplied to the military and civil services is manufactured in Australia. Provision will be included to give industries that require a much higher investment time to gear up. New startups will be encouraged with interest free or low interest loans, depending on the nature of the business and the national security priorities required.

It all depends on You!

Political party governments have taken away our rights, deprived us of a say in how we are governed, and created a top heavy bureaucracy that is harming people’s lives.

The Common Law Assembly system is designed to return people’s freedoms and rights, and provide a way for each of us to achieve our potential to live our lives as we wish. The Sheriffs will serve the community to protect people from criminals and to maintain the peace. The common law courts will provide a method for people to resolve conflicts amicably and fairly in front of a Jury.

We foresee a future where each man and woman can live happy and productive lives, free of the fear currently generated by the political party system.

If this is what you would like for your future and that of your children, then join a local Common Law Assembly and help make common law work!

If there no Assembly in your community yet, why not volunteer to start one yourself? Only you can change the world.