The Great White Fleet was the popular nickname for the group of United States Navy battleships which completed a journey around the globe from December 16, 1907 to February 22, 1909 by order of President Theodore Roosevelt.

After the American War of Independence, both the British Empire and the Americans were in debt to the international banksters led by the Rothschilds, Rockerfellers, the Melons, and others who had financed both sides.

So, when the British Empire could no longer pay those debts, they pointed the banksters in the direction of the Commonwealth countries to collect them.

In 1907 at the Hague, they wrote up eight treaties in total.

Number 4 treaty explains how to conduct war on land ( the rules of their game) this was the beginning of Silent Wars for Silent Weapons, they delivered this to us with the white fleet of America in 1908, and as the white fleet sailed into Sydney Harbour the fleet had their gun turrets aimed at our shores.

We, on the other hand, were there by the thousands waving the American flag, giving them a tickertape parades, and celebrating their arrival. The general public were not aware of the sinister reasons behind the visit by the US Navy. Nor did we know that this was the start of big changes to come for the people of the Commonwealth of Australia that would slowly undermine and nullify our Constitution, our rights, and our freedoms until we have ended up where we are today; under the yoke of a political party corporate dictatorship.

The purpose of the White Fleet’s visit was to not only deliver the Hague Treaties, but to start to administer the country for debts owing to the banksters on behalf of the Crown.

They were there to deliver military orders to usurp our laws and government, and to put the country into Usufruct — (The right to enjoy the use and advantages of another’s property short of the destruction or waste of its substance). From that day on we were to be administered by the current Parliament for debts owed by the Crown.

One of the Military orders was to change our admiralty flags, both red and blue, to a 1:2 ratio, creating Admiralty flags for the corporate government to operate from the sea. Those are not our land flags, which are the red duster with a ration of 3:2.

Another of the instructions under War-rant was to change the six pointed star to a seven-pointed one to include the territories, which are governed outside of our Commonwealth of Australia Constitution Act 1901. Ever since then, the politicians have been administering us into a never-ending d 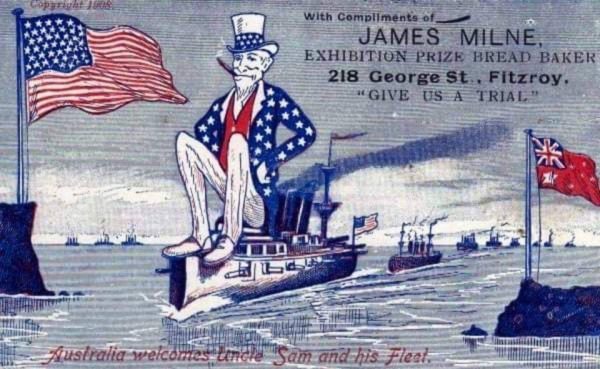 ebt cycle. This change to from the six points to seven points showed us that they were marking their territory. As a result, they never left our country. Instead, they have remained as a shadowy presence in our country to enforce their laws on us. This is why the US has been able to station their troops in our Territory without a referendum of the people.

Those treaties became official on the 26th January 1910 (Download a copy below, or visit the website here  to read them. Note: The 26th of January is not the true Australia day. This is the official occupation day of our Country when we were forced to pay debts of the past that were incurred in our name without our knowledge or permission. These debts are not ours. They belong to the political parties and to their banksters.

The people’s red Federal land flag, was designed by the people to represent the coming together of the colonies of N.S.W, Victory, SA, Queensland, Tasmania and WA.

We have so much evidence to prove that the Federal Red Ensign was used up to the  Flags Act and the Coronation of Queen Elizabeth11 in 1953, which is when our realm changed from a Commonwealth of the People to a corporate republic dictatorship — all done without a referendum of the people, as required by Section 128 of our Commonwealth of Australia Constitution Act 1901.

Over time, they have hidden 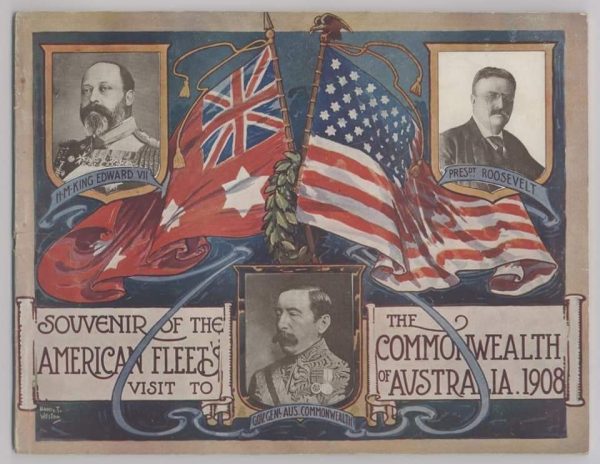 The fleet’s Hulls were painted a stark white, giving the armada its nickname. It consisted of 16 battleships divided into two squadrons, along with various small escorts. Roosevelt sought to demonstrate growing American military power and blue-water navy capability.

The Prime Minister, Alfred Deakin, ignored Britain’s concerns and overlooked protocol when he invited the Americans to visit. Sixteen warships were a dramatic presence when they arrived in Australian waters. In Sydney 80,000 people stood on South Head to watch them enter Sydney Harbour. Crowds, parties, speeches and parades greeted the fleet at each port it visited.

Its arrival in Australia on 20 August 1908 was also used as a political lever to encourage support for the forming of Australia’s own navy. The large white ships were a reassuring sight to those who knew no better; the people who were nervous of Asia, particularly Japan’s growing naval power.

Many souvenirs were produced to mark the event. 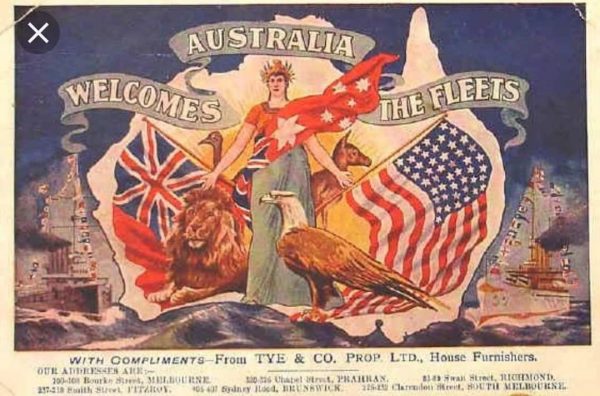 half a million Sydneysiders turned out to watch the arrival of the United States (US) Navy’s ‘Great White Fleet’. For a city population of around 600,000 this was no mean achievement. It was the largest ever seen in Australia. It far exceeded the numbers that had celebrated the foundation of the Commonwealth just seven years before. Indeed, the warm reception accorded the crews of the 16 white painted battleships during ‘Fleet Week’, was generally regarded as the most overwhelming of any of the ports visited during the 14 month and 45,000 mile global circumnavigation.

The NSW Government declared two public holidays. Business came to a standstill, and the unbroken succession of civic events and all pervading carnival spirit encountered in Sydney (followed by Melbourne and Albany) severely tested the endurance of the American sailors. In fact, the American sailors liked Australia too: so much so that over 300 of them deserted while in Australian ports!